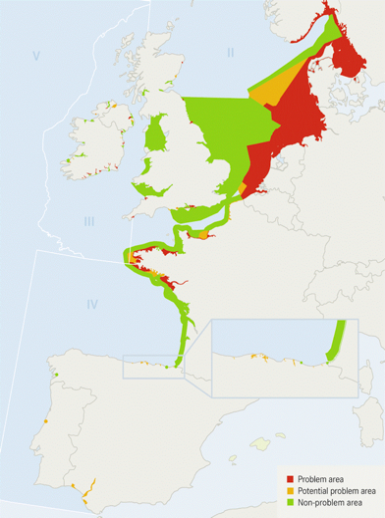 Human-induced nutrient enrichment (cultural eutrophication) is one of the most important anthropogenic pressures that affect estuarine and coastal waters worldwide (e.g. Nixon, 2009). In US and European countries undesirable eutrophication started after the second World War due to the synergetic effect of increased human population and socio-economical development (the so-called Great Acceleration).

Even if due to similar causes (increased nitrogen and phosphorus with respect to silicon delivery) the related eutrophication symptoms (high-biomass non siliceous algal blooms with potential oxygen depletion, toxic phytoplankton…) in the coastal waters can be quite different, depending on the chemical speciation of added nutrients, the local phytoplankton community and the hydro-geomorphological characteristics of the receiving coastal zones.

The North-East Atlantic Ocean (NEA) offers between Portugal and Denmark, a succession of coastal ecosystems, all affected by river inputs but that respond differently in terms of dominant phytoplankton communities and impact on trophic structures and the related goods and services.