The theoretical results produced from the models are carefully compared with all the available observations (see the Belgian Marine Data Center (BMDC) and the Remote Sensing section). This is the validation phase (see examples in Fig. 2 and Fig. 3). An unsatisfactory validation is a sign that the mathematical expressions chosen to describe physical, chemical and biological processes are not correct. A satisfactory validation indicates that the models can be used for management purposes and to a certain extent for forecasting.

As a consequence of eutrophication, the spring bloom in the Belgian Continental Shelf (BCS) is dominated almost every year by the nuisance colonial species Phaeocystis. The eutrophication status of the BCS is mainly determined by the nutrient loads from the rivers Scheldt, Seine, Somme and Rhine. According to the OSPAR strategy (2008), the Belgian coastal zone is still characterised as a “problem area”. It has been shown that efforts should be directed to reduction of N-loads (not only P-loads) in order to decrease Phaeocystis blooms without negatively affecting diatoms (Gypens et al. 2007, Lacroix et al. 2007a). The phosphorus reductions of the last decades caused an increase in riverine N:P ratio (Brion et al. 2008), which is favorable to Phaeocystis. The excessive nitrogen concentration allows Phaeocystis colonies to reach large sizes (when abundances become larger than 6 millions cells L-1), making them inedible to zooplankton. The resulting decrease in zooplankton grazing constitutes a loss for higher trophic levels, and is considered an ecological nuisance (Lancelot et al. 2009). The nuisance of Phaeocystis bloom is usually measured by the intensity of its spring maximum and by the duration of the bloom. It may also be estimated with the annual integral of excessive abundance, IEB (Fig. 4). To study these processes in the BCS, the 3D-MIRO&CO mathematical model was developed in the frame of AMORE project with a full description of hydrodynamical and ecological processes (Lacroix et al. 2007b).

Yet, a reduction in riverine nutrient loads may have a significant impact on phytoplankton production in remote marine areas (Lenhart et al. 2010), illustrating the link between continental freshwater management and offshore marine ecology. As Atlantic waters circulate through the Channel in the northward direction, terrigenous materials entering the coastal zones are eventually exported offshore. The 3D-MIRO&CO model allowed to carry on a trans-boundary nutrient transport study (TBNT). The principle of these simulations is to track the nutrients coming from specific sources during several years, and to analyse their remote impact on ecology. That way, it is possible to identify the different contributive sources to eutrophication in a specific area. This greatly helps to understand the system, and to support the decisions at policy and management levels.

The Figure 6 illustrates that the Belgian coastal zone (BC1 on the axes) receives DIN from several contributors in 2002, firstly from the English Channel boundary, secondly from the French rivers, and thirdly from the Belgian and Dutch rivers in almost equal amounts. In the same area, the major contributor to PO4 is the English Channel in 2002. In the Belgian offshore zone (BO1 on the axes), the French rivers are almost an equal contributor as the English Channel to DIN, while PO4 is almost only imported via the Channel waters. The TBNT study also allowed to estimate the total contribution of rivers to nutrient increase in the sea, by substracting the import of oceanic nutrients at the Southwestern boundary from the export of nutrients at the Northern boundary. For the year 2002, the total nutrient increase in the sea due to rivers is estimated at 76% for DIN and at 54% for PO4 by comparison to oceanic background, which leads to an increase of 14% of the N:P ratio in the Central North Sea due to rivers.

The 3D-MIRO&CO model is currently being coupled to Riverstrahler (Billen et al., 1994), a river basin model, in the frame of EMoSEM, with the aim to test the impact of realistic nutrient reduction scenarios at the watershed level on eutrophication in the coastal area.

Gypens N, Lacroix G and Lancelot C (2007) Causes of variability in diatom and Phaeocystis blooms in Belgian coastal waters between 1989 and 2003: a model study. Journal of Sea Research 57, 19-35.

Effective management of fish stocks requires understanding of how spawning grounds and nurseries are connected and what processes influence larval retention, dispersal and recruitment. The transport of fish larvae from the spawning grounds to the nurseries is driven by hydrodynamic processes, but the final dispersal pattern and larval survival/abundance might be influenced by both behavioural and environmental factors. Individual-based coupled physical–biological models have become one of the standard tools for studying larval dispersal and recruitment.

REMSEM has developed a larval transport model by coupling a Lagrangian particle-tracking model to the 3D hydrodynamic COHERENS model of the North Sea to calculate the movement of individual particles in space and time. In addition, the development of an Individual-Based Model (IBM) allows to take into account the individual life-history of organisms. The IBM includes for instance larval stage-related duration, behaviour such as vertical migration, mortality... The larval transport model is used to investigate trajectories and dispersal (Fig. 7) of fish or invertebrate’s eggs and larvae and to study the impact of interannual variability and behaviour on dispersal pattern (ex. application to Solea solea in Savina et al., 2010; Lacroix et al., 2013). The model is also used to calculate the connectivity (Fig. 9) between spawning areas and nurseries (Fig. 8) and to quantify larval recruitment at nurseries as a support to fisheries management.

While statistical models establish correlations between the variables, they are not suitable to explain the mechanisms that link the variables together in the natural environment. Trait-Based model are dynamical models with a large number of state variables (i.e. species) linked by variation in physiological traits, and constrained by trade-offs between trait-values and ecosystem response. They are developed to test hypotheses about the mechanims that may explain the emergence of particular species or communities under changing environmental conditions. The spatial distribution of benthic communities in the Belgian Continental Shelf is under study with a trait-based model (currently under development). 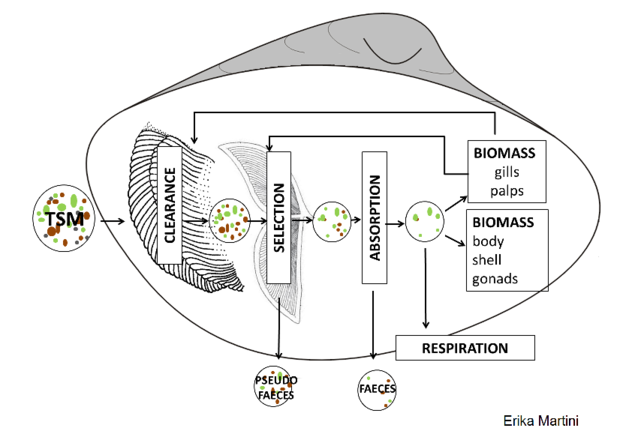