COHERENS is an open source ocean circulation model developed during the nineties by several european institutions and the Management Unit of the North Sea Mathematical Models and the Scheldt estuary (MUMM, now OD Nature). The name COHERENS is an acronym for COupled Hydrodynamical Ecological model for REgioNal Shelf seas. It is a three-dimensional multi-purpose numerical model, designed for application in coastal and shelf seas, estuaries, lakes, reservoirs, ... The model is available as a free source code for the scientific community following the GNU General Public License principles and can be considered as a tool for a better understanding of the physical and ecological processes and for the prediction and monitoring of waste material in shelf seas, the coastal zone and estuaries.

Its ease of implementation across a range of computing platforms means that it is attractive to groups who have a sufficient modelling expertise and have need for sophisticated model products. Important advantages of the model are its transparency due to its modular structure and its flexibility because of the possibility to select different processes, specific schemes and different types of forcing for a particular application. The program structure allows users to perform process academic as well as predictive and operational setups without knowledge of the detailed model structure.

The first version of the program, now denoted as COHERENS V1, was developed over the period 1990-1998 in the framework of a series of European funded projects. Preparation for a full update of the program was carried out between 2003 -2009 (European Projects ODON and ECOOP). The major updates in V2 concern the introduction of a more flexible curvilinear mesh, computations on parallel machines, generalized vertical coordinate and nesting of finer sub-grids within coarser main grids.

From 2008 to 2015 further developments in version V2 were carried out in the framework of the project "Uitbouw numeriek modelinstrument voor de Noordzeehavens" (Expansion of the numerical modeling tools for the North Sea Harbors), assigned by the Maritime Access division (aMT) of the Department of Mobility and Public Works of the Flemish Government. These developments were carried out by a consortium of IMDC n.v. and Antea Group n.v., supported by the universities of Gent and Leuven and consisted of adaptations and additions to the existing code, in order to better represent the estuarine and coastal conditions. Major developments in this phase consisted of the implementation of a multigrid solver, introduction of dedicated modules for sediment transport and morphology, dredging operations, structures for engineering applications, wave-current interaction and additional boundary conditions. The addition of a central input file has made the code more accessible. A validation document has been composed by Flanders Hydraulics Research.

The COHERENS model is freely available and is released under the “European Union Public Licence” (EUPL).
The EUPL is the first European Free/Open Source Software (F/OSS) licence.
It has been created on the initiative of the European Commission.

When publishing the EUP, the European Commission has paved the way for legal interoperability. The EUPL is the first open source licence with a working value in all EU official languages. The EUPL is now used by European and national administrations, and by enterprises as well. 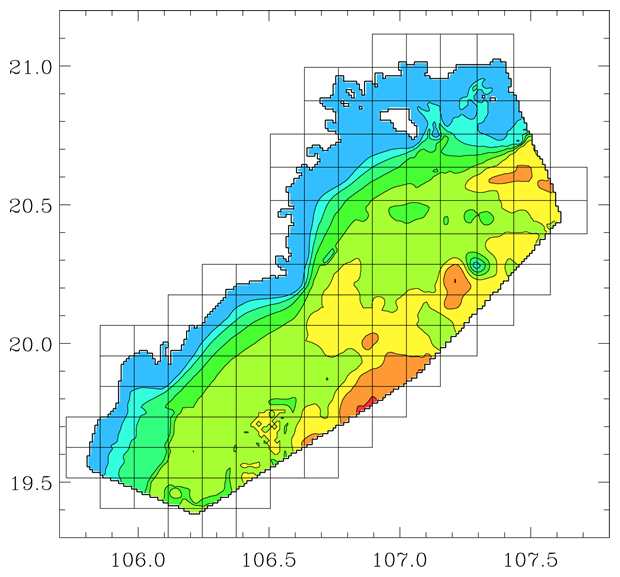 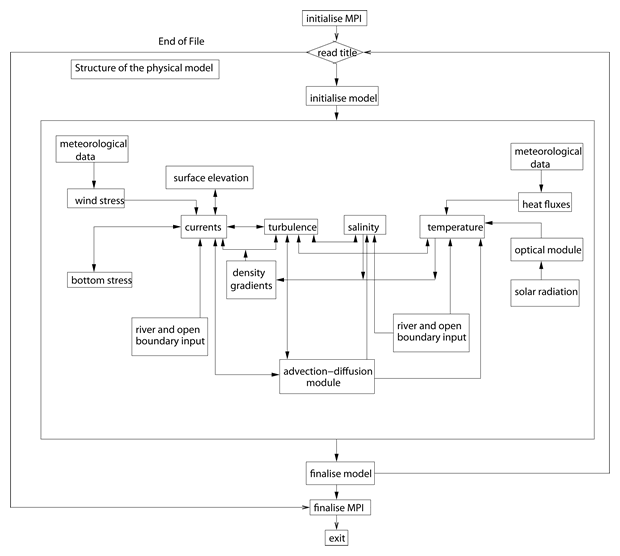 An example of the use of dry cells is depicted below: 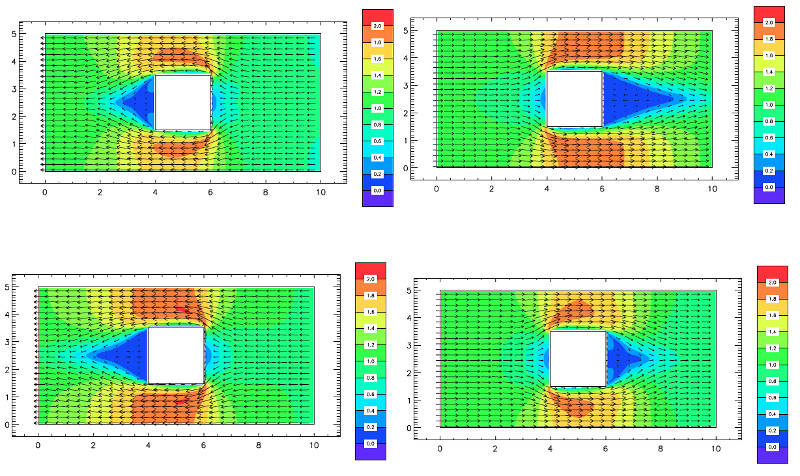 A morphology module is implemented into COHERENS in order to simulate the morphological evolution of sediment beds due to erosion and deposition patterns caused by the model flow. The morphological effects that can be modeled can be grouped into five categories:

Bed elevation change: A continuity equation for the material in the bed, also known as the Exner equation, is used to calculate the rate of increase or decrease of the bed level elevation due to sediment deposition or erosion. With respect to the time integration, the important consideration of limiting computation time led to the implementation of the first order Euler, the second order Adams-Bashforth and the third order Adams-Bashforth schemes.

Fixed layers: In general morphological simulations, the bed consists of an endless amount of sediment across the entire domain. A fixed layer, however, is a layer that cannot be eroded by the flow; it is immobile and remains as such for the duration of the simulation. The mobile sediment that lies on top of this fixed layer is finite and can be exhausted. When all sediment on top of a fixed layer has been transported and the bed has reached the level of the fixed layer, sediment transport halts.

Vertical sorting: In case of stratified beds - i.e. beds that are composed of different sediment layers - some applications require to keep track of bed properties such as the thickness and the sediment fraction distribution of each separate layer the bed is composed of. These properties can change due to erosion, deposition and other mechanisms through which sediment is exchanged between different bed layers. This exchange of sediment between layers is denoted vertical sorting.

Avalanching: From geomechanics, it is known that every granular material possesses a so-called static angle of repose, i.e. the steepest angle of descent or dip of the slope relative to the horizontal plane when material on the slope face is on the verge of sliding. When this slope exceeds the static angle of repose, it is likely to collapse and decrease to a lower value denoted the dynamic angleof repose. This collapsing process is called avalanching. 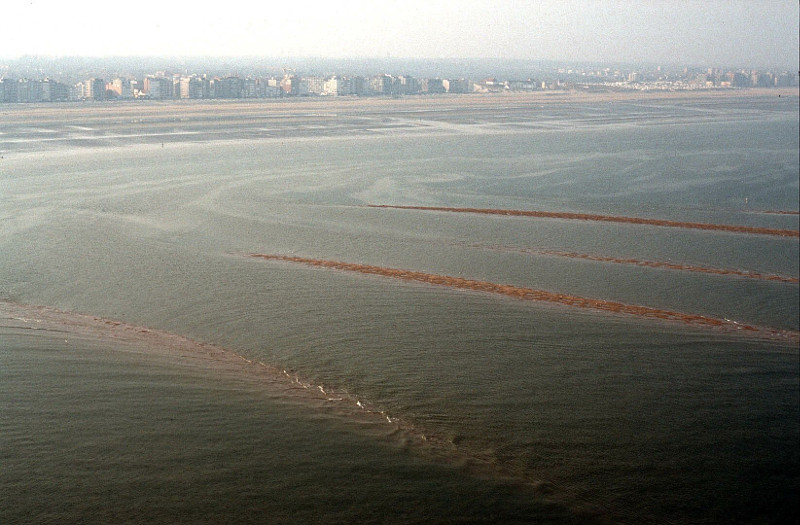 A numerical model of a realistic application will probably need to include sediment at some point, as most natural ports, waterways and even oceans have a bed that consists of mobile sediment. This sediment is either transported by the flow as suspended sediment or deposits on the bed where it accumulates until it is eroded back into transport by the flow. COHERENS contains the following sediment transport related functionalities. 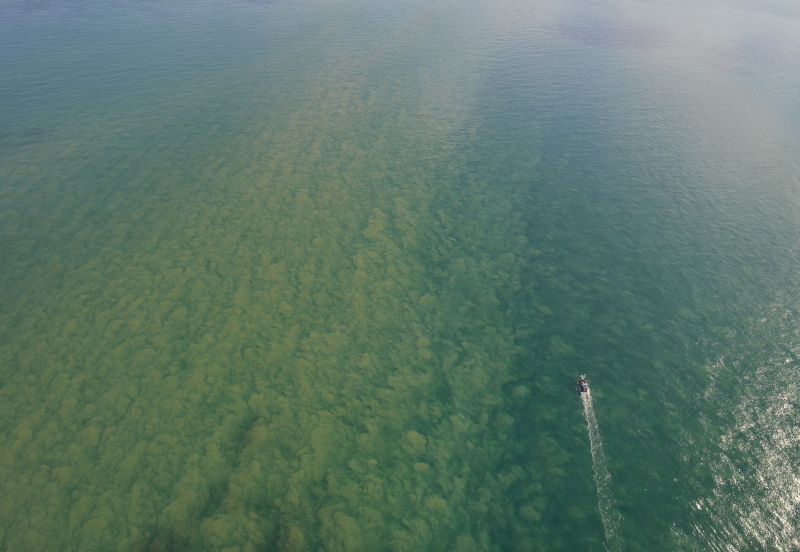