Where is RV Belgica?

The Federal Science Policy Office is the proud owner of the Belgian oceanographic research ship: the Research Vessel A962 Belgica, or RV Belgica. The ship is placed at the disposal of Belgian scientists in order to carry out marine scientific research. The OD Nature of RBINS takes responsibility for the ship's budget, the scientific instrumentation and the planning of scientific campaigns. The Belgian Navy provides the crew, operational support and a mooring in the home port of Zeebrugge.

From Monday to Friday the ship sets off from Zeebrugge and sails to all the remote corners of the Belgian part of the North Sea, but also far beyond. On longer campaigns, she even sails into Moroccan, Portuguese, Spanish, French, British and Irish waters. On an average measuring campaign the crew and scientists embark on a Monday morning and disembark on a Friday afternoon. During a campaign different research teams embark together and work in shifts, so that all available ship time is used efficiently, day and night. 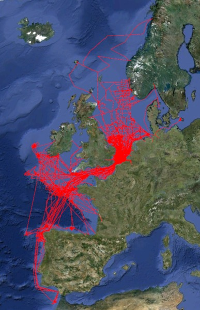 The RV Belgica monitors the quality of the North Sea by constantly collecting all kinds of data about the biological, chemical, physical, geological and hydrodynamic processes which occur (monitoring). The ship is a 50.9 metre long sailing laboratory used by the researchers of the Belgian universities and scientific institutes to increase our knowledge of the seas. Scientists take samples of water, soil and living organisms. They test new fishing techniques, investigate the influence of sand extraction on the sea bed and study the effect of wind farms on sea life. Due to its versatility this Belgian oceanographic ship is used not only by Belgian teams of marine scientists but also by foreign teams with whom we collaborate in the context of the European framework programmes. RV Belgica’s international campaigns have already led to the discovery of cold water coral mounds to the South West of Ireland and mud volcanos off the coast of Morocco. The research that is carried out on the RV Belgica is therefore important in managing the North Sea, but just as important for fundamental research in neighbouring seas and oceans.