Since 1991, MUMM has been conducting its observation flights above the sea with a twin-engine reconnaissance aircraft of the 'Britten Norman Islander' type. With a flying autonomy of 5 hours and an average cruising speed of 120 knots, the Britten Norman Islander is ideally suited to regularly monitor the North Sea. The aircraft also has two lateral convex windows, which greatly increases the quality of visual observations of marine pollution or the monitoring of marine mammals. The used aircraft was until 2005 owned by the Ministry of Defense and was therefore a military aircraft. It was stationed in the School of Light Flying in Brasschaat and was known under the call sign 'B-02'. MUMM equipped the B-02 with various scientific sensors and instruments which are indispensable in order to be able to carry out the main task, the detection of marine pollution, efficiently. In 2005, when Defense took this type of aircraft out of circulation, the plane was transferred to the Federal Science Policy and it got assigned a new callsign, "OO-MMM'. After 20 years of aerial surveillance, the aircraft was refitted in 2012 with a new, fully integrated digital radar remote sensing system making the detection and reporting of various findings and observations easier and faster. Consequently, the onshore follow-up was improved as well. In 2015 the aircraft instrumentation was further expanded with a prototype sensor (sniffer) to monitor the sulphur emissions from ships at sea .

On this page you will find all the information about the fight against air pollution from ships.

The remote sensing (and other scientific) equipment for the surveillance aircraft functions as follows: the Side-Looking Airborne Radar ( SLAR ) scans the sea surface over a lateral distance of 20 km on either side of the plane (long-range sensor). The two black tubes at the bottom of the aircraft are the lateral antennas of the SLAR that capture reflected radar signals. A black line or spot on a SLAR image visible in high contrast with the surrounding seawater (that appears on a SLAR image in an even-gray color) indicates a possible marine pollution. The smoothing effect of oily substances on the waves is at the basis of this form of remote sensing. Mineral oil spills, or other floating substances with a similar damping effect, can therefore be detected at great distances both during the day and at night and with good and poor visibility. The presence of in sea discharged substances exhibiting no dampening effect on the waves and/or that arrive in the water column are predominantly determined visually.

The additional infrared camera on board of the aircraft is a short-range sensor. When a spill or contamination is detected by SLAR and the aircraft has flown to it, an additional image of the spill can be obtained with the IR camera. The IR camera captures temperature differences between the spot and the surrounding water and can therefore be deployed during day as well as during night. Thinner parts of an oil slick appear 'cooler' due to evaporation, while thicker parts of an oil slick appear 'warmer' due to warming by the sun. Being able to distinguish thinner and thicker parts in an oil spill is especially essential during oil control operations.

The aircraft is also equipped with a digital video camera and two digital reflex cameras. When an authorized agent makes an observation at sea, it is important to properly document this. With clear photos, an observation is immediately visualized. Digital photos can also be sent quickly to the relevant services and authorities on shore that are responsible for further investigation or for emergency interventions at sea. With digital video images, a continuous image recording of an observation can be obtained, for example when flying over an oil slick towards a suspicious ship.

The GPS and the Flight Management System (FMS) allow exact localization, but also the registration of time, date, wind speed and direction, course and speed of the aircraft.

The central digital MEDUSA control unit integrates the various sensors and sensor images. It is also equipped with a digital nautical chart and has a built-in AIS receiver that allows automatically remote identification of ships.

In addition, the aircraft is equipped as well with all the necessary communication means in order to ensure that the mission tasks may be performed as efficiently as possible may. The VHF radio is used for communication between the aircraft and vessels. The emergency channel 16 and the coast guard channel 67 are always monitored in the aircraft. Channel 73 is the anti-pollution channel and is specifically reserved for communication related to marine pollution. All operators on board the coast guard aircraft have a certificate that allows the use of the marine VHF.

Satellite communication (SATCOM) is used as well. This allows the pilots to get real-time weather information and establish telephone communication.

Finally, the aircraft is equipped with a WiFi dongle with 4G connection. After the flight, it is therefore possible to send immediately initial flight reports and associated photo and video material to the relevant partners. 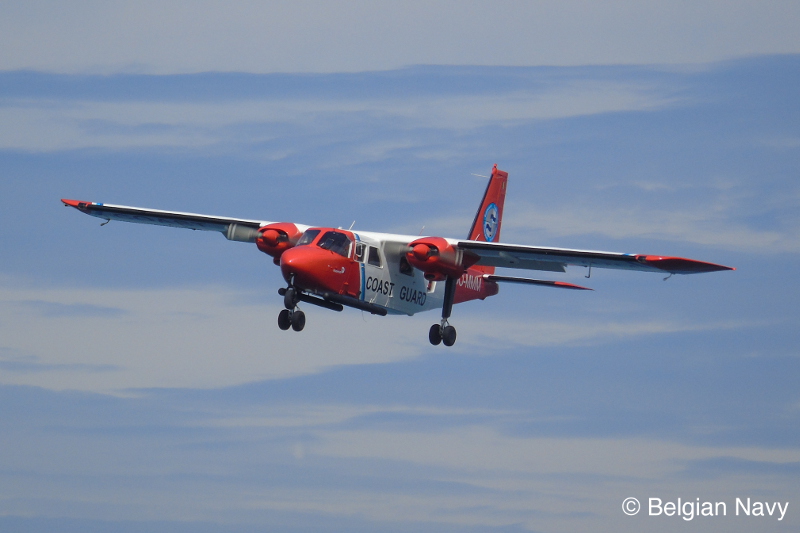 The surveillance area of the main mission of the aircraft, the detection of marine pollution from oil or other harmful substances from ships, was defined in the Bonn Agreement as the "Bonn Agreement on Quadripartite Zone of Joint Responsibility". This zone is situated between two northern latitude parallels in the southern North Sea and includes the Belgian sea areas and the neighboring countries' waters. Within this zone, Belgium, the Netherlands, France and the United Kingdom have the right to conduct regular pollution control flights. This part of the southern North Sea is internationally known as one of the busiest sea areas in the world, making it a high-risk area for operational or accidental marine spills that are of high interests and importance for the four nearby coastal states.

The fisheries flights and other national supervisory tasks under the Belgian Coast Guard mainly take place over the Belgian waters, which consist of the Belgian territorial sea and exclusive economic zone (EEZ). Scientific monitoring also takes place mainly above the Belgian sea areas. 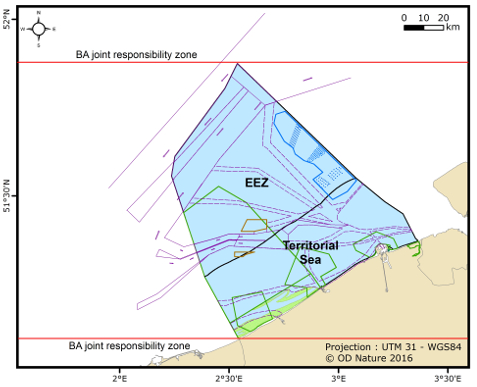 The MUMM surveillance aircraft operates several days a week above the sea and operates during day and night, during the week and at the weekend. The stability of the aircraft and the instrumentation on board allow the plane to operate in fog or in bad weather conditions. Given the nature of the assignment, flight planning is of course strictly confidential.

During each surveillance flight, a pre-planned and continuously varying route is flown between fixed coordinates. The flight routes are planned on the basis of fixed waypoints (B1, FB2, UKB, NH, ...). During a flight, depending on the observations made above the sea, it is always possible to deviate from the planned flight route.

Most spills observed at sea are the result of ship operations and are therefore called 'operational discharges'. The internationally applicable discharge standards are laid down in the MARPOL 73/78 Convention. Annex I of this Convention regulates ship discharges of mineral oil. Annex II describes ship discharges of other harmful liquids (so-called Noxious Liquid Substances or LNS). Annex V regulates the dumping of solids and waste from ships. Finally, Annex VI deals with the atmospheric pollution of ships, and has recently led to a new observation task for MUMM, namely the monitoring of ship emissions in the North Sea with the help of a sniffer sensor.

In case of a collision at sea or other shipping accidents, accidental marine pollution can occur. This type of pollution is detected and documented with the plane in the same manner as for operational contamination by oil or other hazardous liquid substances.

Sea pollution from oil or other harmful liquids

During a routine pollution control flight aerial operators try to perceive marine pollution visually and with the scientific sensors.

When a mineral oil contamination is found, the operator always calculates the approximate amount of oil discharged floating on the water surface. This estimated oil volume in the sea is important to be able to evaluate the severity of the discharge and its impact on the marine environment.

If an operational marine pollution is detected, the polluter is unfortunately far away in many cases. But when a ship is caught red-handed while carrying out an illegal operational discharge, the aircraft performs an additional manoeuvre to approach the ship and identify the polluter. The task is to safely track the trail of pollution during day and night, and to fly close to the suspect vessel to read the name and home port on the hull, and to document all this in real time. After the observation a flight report is transferred as soon as possible to the Coast Guard Center so that subsequent research can be rapidly initiated by the competent police and judicial authorities.

For sulphur monitoring flights with regard to the enforcement of MARPOL Annex VI, the collaboration and communication towards the European port inspection network or Port State Control (PSC) is crucial. PSC is responsible for conducting and coordinating inspections of vessels in port (to implement the EC directive and 2016/802 and 2015/253). Purely based on sniffer measurements at sea no official reports or warrants are drawn up (yet), this only happens if sufficient evidence of infringement is found during a port inspection and fuel sampling. Sulphur measurements at sea with the sniffer sensor therefore mainly serve as a targeting system to make port inspections more effective. 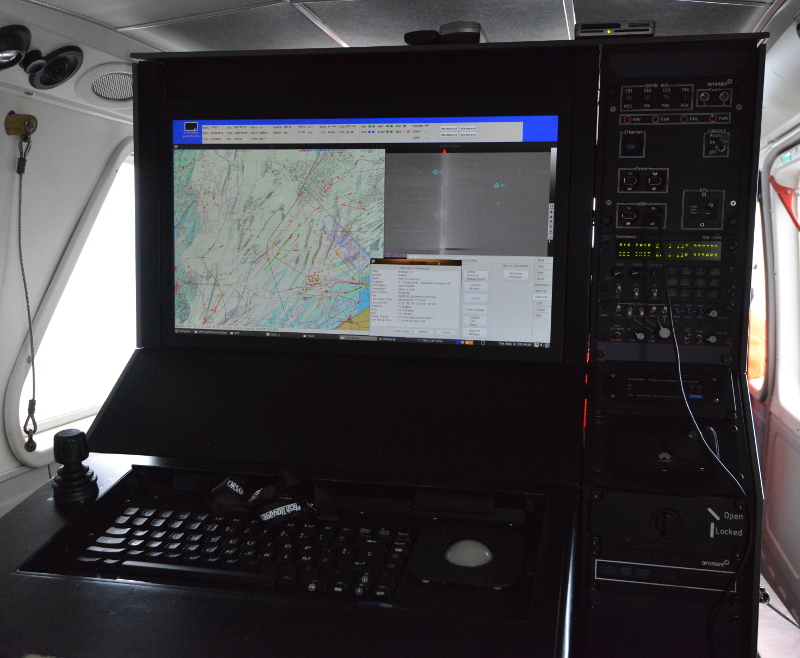