Waves start from wind moving over the water surface. The friction between wind and water causes ripples and eventually a wave. How strong a wave will be depends on factors like speed of wind, time and distance of wind.

Waves are an energy source that could be used to cover a part of the electricity needed. The difficulty here is to find ways to turn the wave power into usable energy and more specific, into electricity.

Some techniques are operational, others are in the design or test phase.

In the Belgian part of the North Sea, some pilot projects are foreseen for the coming years.

With the MD of April 13th 2015, the THV Mermaid received an environmental permit for the exploitation of a pilot project of wave energy convertors (WEC) with a total capacity of maximal 5 MW. In the permit, one testing ground is accepted. There one or more WEC systems can be installed in the free space between de wind turbines.

On December 19th 2016 NEMOS has introduced a request (including an environmental impact study and a non-technical summary) for an environmental permit for the construction and exploitation of a temporary research structure for wave energy conversion, at a distance of about 500 meter north of the eastern harbour wall in Ostend. After an operational test phase that ends in 2020, the installation will be dismantled and removed. 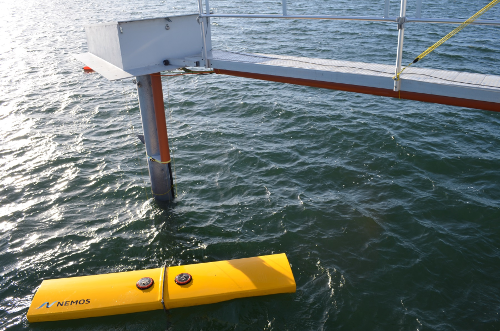