Sand and Gravel Extraction in the North Sea


Sand and gravel were first extracted from Belgian waters in 1976 (29,000 m³). Marine sand extraction has gradually increased over the years due to growing demand for marine sand following the exhaustion of sand quarries on land. A total of 2,800,000 m³ of sand was extracted from the Belgian area of the North Sea in 2015. Between 1976 and 2015 a total of 62,000,000 m³ of marine sand has been extracted.

Sand is now the main aggregate extracted, because the remaining gravel in Belgian waters is not of the ideal quality (too fine). The sand goes to the construction industry where it is used to produce concrete, asphalt and mortar or as a material for drainage, foundation and elevation works. Large quantities of coarse sand and gravel were needed in the 1990s for major infrastructural works, such as the laying of gas pipelines. The key years were 1991 and 1997, in which close to 4,000,000 m³ of sand and gravel were used to cover Zeepipe, Interconnector and Norfra. The Flanders Region extracts sand for use in coastal protection and beach nourishment programmes. In 2014 a good 3,500,000 m³ of sand was extracted for beach nourishment.

The exploration and exploitation of sand and gravel is confined to certain designated areas of the Belgian continental shelf. Sectors for which concessions may be granted are set out in the Marine Spatial Plan of March 2014.

The application procedure for a sand and gravel exploitation concession is established by the Continental Shelf Act (19 June 1969, Belgian Official Journal of 8 October 1969, amended on 20 January 1999 and 22 April 1999) and two Royal Decrees, i.e. the RD PROC of 1 September 2004 (amended on 19 April 2014) concerning the conditions and procedure governing the award of exploitation concessions and RD MEB of 1 September 2004 (amended on 19 April 2014) concerning the environmental impact assessment.

The sand and gravel environmental permit application procedure described below is based on the aforementioned Royal Decrees.

The applicant submits an environmental impact report (EIR) to the Scientific Service Mathematical Model of the North Sea (MUMM) of the OD Nature and to the FPS Economy. MUMM checks that the EIR is complete, after which it is open to inspection by the public for a period of 45 days. In an environmental impact assessment (EIA) MUMM then gives its opinion as to whether the activity is permissible in the marine environment. Finally, the EIA and the recommendation request are sent to the Advisory Committee. This Advisory Committee coordinates all agencies involved in the management of sand and gravel exploration and exploitation in the Belgian area of the North Sea and to this end meets several times a year. On receiving the Advisory Committee's advice the MUMM assessment is communicated to the federal Minister for the North Sea, who in turn gives his recommendation to the federal Minister for the Economy. The recommendation of the Minister for the North Sea is binding. If the recommendation is negative a concession for the extraction of sand or gravel cannot be granted. Finally, the concession is granted or refused by the federal Minister for the Economy.

Where is sand and gravel extraction permitted?

In the Belgian area of the North Sea sand and gravel extraction is only permitted in the 4 control zones.

Zone 1 contains a designated reference area for monitoring the environmental impact of the sand extraction operations and wind farms. Sand and gravel extraction are forbidden in this area. Sections of zones 2 and 3 are also closed (Buiten Ratel, Centrale Kwintebank, Noordelijke Kwintebank). The total extraction depth must be no more than 5 metres below the reference level. If a study shows that the depth has been exceeded, the areas will be closed to sand extraction.

On the 10th of November 2010 the Maritime Services and Coastal Agency - Coastal Department submitted an integrated environmental impact report (for marine aggregate extraction in control zone 4 of the Belgian part of the North Sea).

The same environmental impact report was submitted by several firms as part of an application for a concession to extract aggregates on Zone 4. In 2016 there are 15 concession holders in the Belgian part of the North Sea.

On the initiative of Zeegra vzw, the Coastal Department and the Maritime Access Department, a new environmental impact report was drafted in 2016 in relation to the sand and gravel extraction in control zones 1, 2 and 3 in the Belgian part of the North Sea.

How much sand and gravel is extracted?

The quantity of sand extracted has gradually increased since 1976, when sand was first extracted from the Belgian part of the North Sea. Between 1976 and 2015, 62,000,000 m³ of marine sand was extracted.

In the control zones the concession holders as a whole, may extract a maximum volume of 15 million m³ (3 million m³/annum as a progressive average over 5 years), spread over a five-year period. This maximum permissible volume does not take account of volumes extracted for special projects, such as the Coastal Safety Master Plan.

A new concession holder may extract no more than 100.000 m³ in the first year. The Advisory Committee informs the Minister for Economy each year of the quantities which each concession holder is entitled to extract in the following year. To protect the "Vlaamse Banken" habitat directive areas the extractable volume in zone 2 reduces by 1 % every year.

How is the sand extracted?

A suction dredger has one or two suction pipes fitted with a dredge drag head, fixed to the side of the ship, which trails along sea bottom. The sand and water mixture is pumped to the surface and piped into the hopper, the ship's hold. Once loaded the ship sails to its delivery point.

Effect on the marine environment

The concessions involve payment of a fee which the government uses to monitor the impact of the operations on the marine environment. OD Nature is responsible for monitoring the hydrodynamics and sediment transport and does this by means of numerical models and surveys. These measurements help relate the operations to any changes in habitat, because the process could lead to a loss of biodiversity. An extensive survey has been made of zone 4, HInder Banken, due to its huge volumes of extractable sand and the proximity of ecologically valuable gravel beds. The survey consists of a time series analysis of the acoustic travel times on the seabed combined with time series analyses of the water column. There is also an intensive sampling programme in place and visual observations are made of the habitat. Uniquely in the marine environment, numerical impact models are linked to 3D geological models which help identify the quality and quantity of the extractable geological layers. The knowledge and information generated is used to define threshold values to ensure maximum sustainability in the resource's exploitation. This provides the basis for a multiple criteria questionnaire which should support management of the aggregate in the long term.

The vessels used to extract the sand and gravel must be fitted with an automatic registration system, a black box. These black boxes record a variety of parameters, such as vessel identity, course, date, time, position, speed, pump status and extraction status. OD Nature manages the registration devices and processes the data on behalf of FPS Economy. This system helps ensure compliance with the conditions of the concession license. The data are also used for scientific purposes. The programme of aerial surveillance over the North Sea provides added monitoring data of sand and gravel extraction operations at sea.

The effects of marine sand and gravel extraction are studied internationally by the ICES WGEXT working group (of which OD Nature is a member). The OSPAR Convention also recommends that Member States take account of the ICES guidelines, because sand and gravel extraction is a human activity with the potential to affect marine ecosystems and habitats. 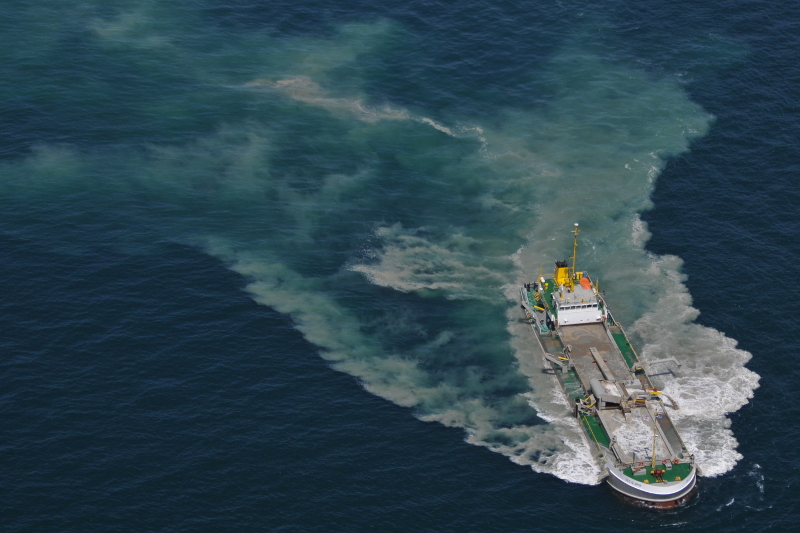