Large quantities of munition were left behind in Belgium after the First World War. The process of collecting and taking this munition to temporary storage locations gave rise to some extremely dangerous situations. Because the situation was gradually becoming untenable and it was still too risky to disarm and dispose of the munition, the Belgian government decided in late 1919 to dump it all at sea. Every day for a six-month period a ship's hold of munition was dumped on the shallow coastal sandbank just off Knokke-Heist, known as the "Paardenmarkt". Soon after that the muition dump would be forgotten. But when an area east of the port of Zeebrugge was dredged in 1971 they found munition and poisonous gas shells at 17 locations. Since the munition had been partially covered by a thin layer of sediment, its condition was reported as "remarkably good". In 1988 a magnetometric study confirmed that shells were present over a larger area. As of that point the area was displayed on the hydrographic maps as a pentagonal zone covering some 3 km², in which it was forbidden to fish or drop anchor.


The Natural Environment Operational Directorate and Directorate General of the Environment organise regular samplings at the Paardenmarkt. These samples test for potential pollutants from the poisonous gas shells. The sampling study has recently incorporated a number of biological parameters that could serve as pollution indicators. The OD Nature has developed mathematical models to simulate how substances such as Yperite (mustard gas), CLARK I, CLARK II and TNT might spread through the ground and water column if they escaped from the shells into the sea. These simulations show that the toxic effects of Yperite are likely to spread only a few centimetres from the leaking shells. 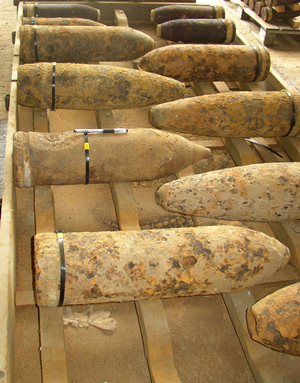