Belgium is one of the ten signatories to the cooperation agreement “to prevent and combat the pollution of the North Sea by oil and other harmful substances” (Bonn Agreement, 1983). The signatories are the nine North Sea coastal states, namely Belgium, Denmark, France, Germany, Ireland, the Netherlands, Norway, Sweden and the United Kingdom, plus the European Union. The Bonn Agreement covers the Greater North Sea area and is the mechanism through which the ten parties are able to work together to combat accidental pollution at sea resulting from maritime disasters and chronic pollution from ships and offshore installations.

To effectively respond to accidental and operational pollution in the North Sea, the parties to the Bonn Agreement carry out a number of activities that can be categorised into five fields : aerial surveillance, exercises, response, research, operations. Aerial surveillance to detect and help combat pollution at sea has been carried out since 1989, the Belgian programme for aerial observations over the North Sea being launched in 1991 under the management of MUMM-OD Nature.

To ensure regional readiness the parties to the Bonn Agreement share their knowledge and every year carry out a number of joint exercises and operations. There is also a continuous exchange of information and cooperation between the experts in various fields of research.

Despite the many efforts to ensure shipping security there will always be a risk of incidents at sea. The North Sea also includes some of the busiest shipping areas in the world, including the Strait of Dover, while other areas are often hit by violent storms. The combination of a continuous growth in maritime transport and an increase in human activities at sea, such as the building of wind farms, is bringing increased risks for the marine environment. As a consequence the parties to the Bonn Agreement are endeavouring to improve the joint approach to combatting pollution at sea based on regional risk analyses and the use of the best available methods and resources. 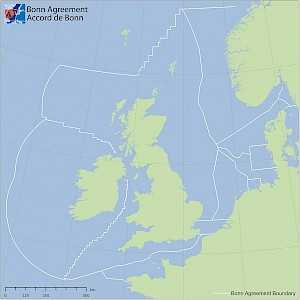